A story to live by!

There was a blind girl who hated herself because she was blind. She hated everyone, except her loving friend. He was always there for her.. She told her friend, 'If I could only see the world, I will marry you.'

One day, someone donated a pair of eyes to her. When the bandages came off, she was able to see everything, including her friend.

He asked her,'Now that you can see the world, will you marry me?' The girl looked at her friend and saw that he was blind. The sight of his closed eyelids shocked her. She hadn't expected that. The thought of looking at them the rest of her life led her to refuse to marry him.

Her friend left in tears and days later wrote a note to her saying: 'Take good care of your eyes, my dear, for before they were yours, they were mine.'

This is how the human brain often works when our status changes. Only a very few remember what life was like before, and who was always by their side in the most painful situations.

Life Is a
Gift

Today
before you say an unkind word....
Think of someone who can't speak.

Before
you complain about the taste of your food....
Think of someone who has nothing to eat.

Before
you complain about your husband or wife...
Think of someone who's crying out to GOD for a companion.

Today
before you complain about life...
Think of someone who died too early on this earth.

Before
you complain about your children...
Think of someone who desires children but they're barren.

Before
you argue about your dirty house someone didn't clean or sweep....
Think of the people who are living in the streets.

Before
whining about the distance you drive Think of someone who walks the same distance with their feet.

And when
you are tired and complain about your job...
Think of the unemployed, the disabled, and those who wish they had your job.

But
before you think of pointing the finger or condemning another....
Remember that not one of us is without sin.

And when
depressing thoughts seem to get you down....
Put a smile on your face and think :
you're alive and still around.


Dear Kjee, thank you for the wonderful recipe. Love it. Not only it is easy to prepare but it is tasty too. Actually I thought of baking just one piece for us. But when I copied down your recipe, I didn't copy the 'yields' part. So I thought by mixing just half the ingredients, I'd be getting one, just nice for my leftovers currypuff filling. But when I'm done mixing the batter...
Oh Ohhhh... this doesn't look like one. Looks like THREE! Hahaha.. true enough, when I read the recipe in your blog, you did mention, one recipe yields SIX! So half means THREE! Huhuhuhu... But it was not a bad thing too... I managed to give my neighbours one each for them to eat during Iftaar. And that little amount of currypuff filling is just enough for the three kuih bakar. Alhamdulillah!

Anybody interested to order these lovely Kuih Bakar Daging? Anyone?
Errr... not from me though! Hahaha, Kjee will say that I am a stingy fella if I were to sell these! Hahaha... You can place your order from Kjee ya.

And oh, this is what I found when trying to look for her contact number... See what Fauziah Ahmad Daud has to say in her FB...

So what are you waiting for? *wink* 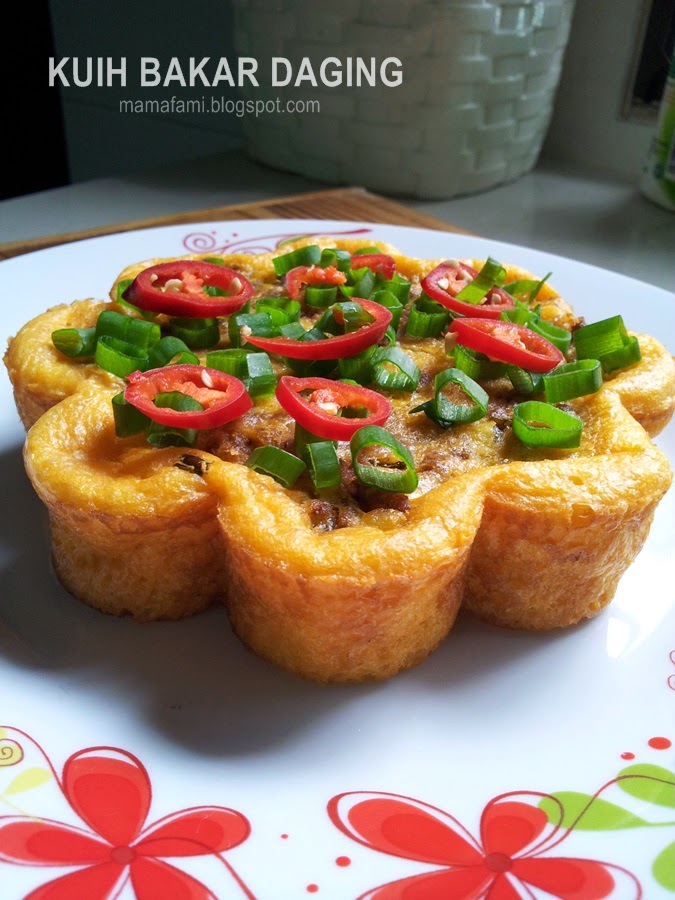 1. Heat oil in a heavy based wok. Add in onion. Saute till onion turned soft.
2. Add in meat curry powder and stir fry till fragrant.
3. Add in minced meat. When the meat is almost cooked, add in salt and zeal.
4. Stir to mix and remove from heat once the water is reduced. Set aside to cool. 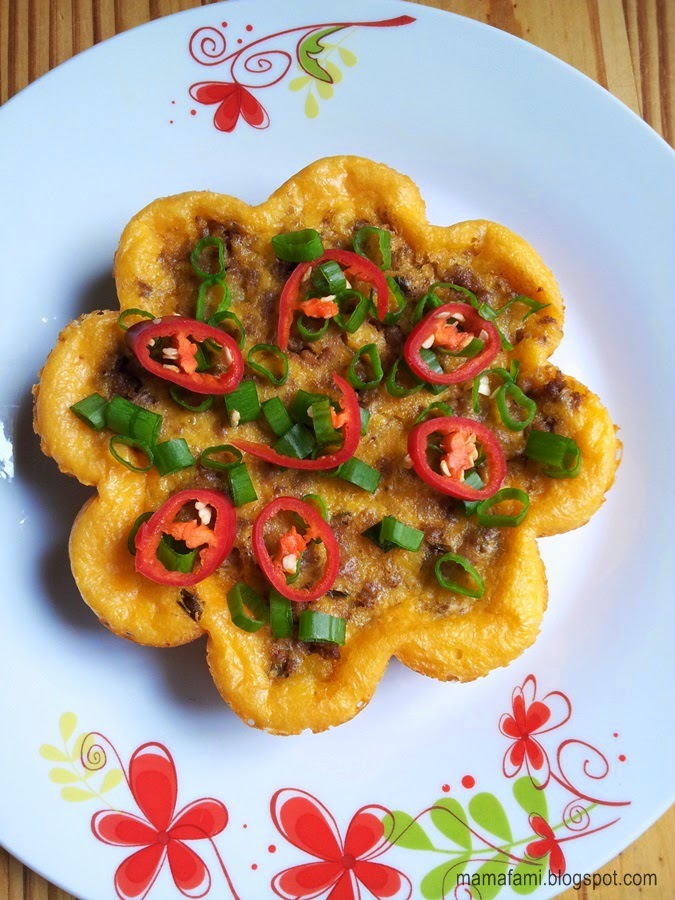 
1. Beat eggs till light.
2. Add in coconut milk, water, salt and yellow food coloring. Mix well.
3. Finally add in flour a little at a time and whisk continuously. If the batter is still lumpy, pour the batter into a blender.
4. Heat the kuih bakar mould and add a bit of oil. Grease the mould and when it's hot, reduce the heat and pour the batter until 3/4 full.
5. After a minute or so, spoon the filling onto the batter.
6. When the sides of the batter starts to get crispy, remove the mould from heat and place it in a preheated oven at 160 C (I used my small oven) and bake it for another 15 to 20 minutes. Use just the top heating setting.
7. Once baked, remove from the mould and garnish with scallions and fresh red chillie.

Note :
I didn't prepare the filling according to Kjee's recipe as I had some leftover currypuff filling. Recipe can be found here 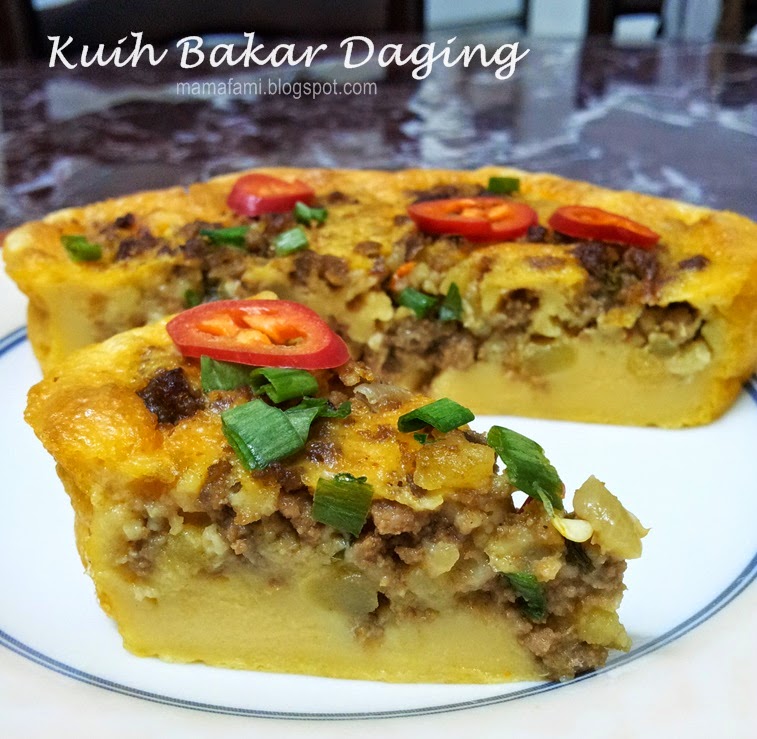 Have a nice day!

Written and posted by MamaFaMi at 11:04 PM

Email ThisBlogThis!Share to TwitterShare to FacebookShare to Pinterest
Labels: Kuih-muih