I am going nuts over bread. I just can't resist baking bread, whenever I saw someone posting photos of bread! Gosh.... I need to get help now! Hahaha... I am breadaholic! Hahaha.... is there any such word as that! Well, as long as it's not against the law, I think the police won't bother to come and get me!

Anyway, yesterday I had promised to share this newly tested recipe. Made it yesterday for my brother to bring home. Whenever my brother said he's coming, that was like my golden opportunity to try out whatever recipe that I had in mind. My nieces and nephew good eaters, unlike my kids, slightly choosey. But now they are much better compared to before. So yesterday, I was in the kitchen very early. Made for them a chiffon cake, bread and also serimuka. Wanted to bake more, but ran out of time!

Okay, back to the bread story... when I came across Nana's bread photo in her facebook wall, I had asked for the recipe which she had kindly tag me in her notes. And I said to myself, I must give it a try one day and that day was yesterday. Well, my honest review of this bread, it would be the loveliest, if I had omitted the ghee. To me and also to those whom I had given the buns to taste, had the same opinion that the ghee gave a funny taste to it. But the texture is so soft and lovely. InsyaAllah I will try again this recipe without the ghee and see how it goes. My heartiest thanks to Puan Asmahan Hanim and Puan Nana Samat for sharing this recipe with us... Allow me to post it here for many others to try. Whatever I've posted in English was how I had made the bread. The original recipe is the one in Bahasa Malaysia... May Allah bless you both.... 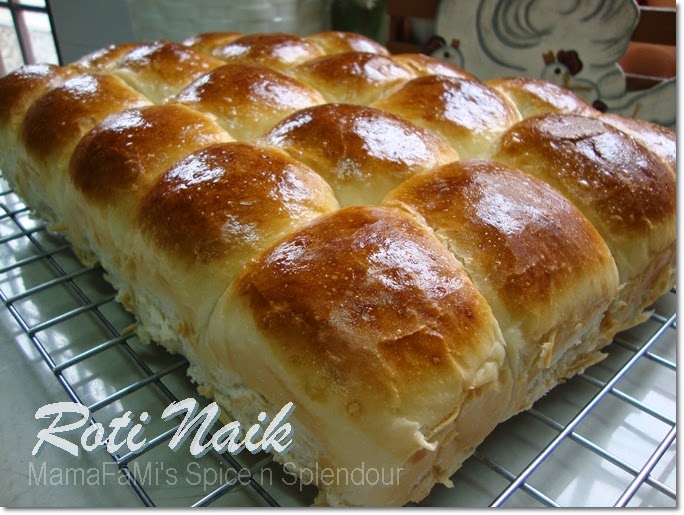 
1. Pour water, egg and sugar into the bread maker pan. Top it with flour and yeast.
2. Set the breadmaker to Dough function.
3. Once the dough is just combined, add in margarine and ghee. Leave the Breadmaker to continue doing it's job. This process will take about 1 1/2 hour including prooving.
4. Divide the dough into 20 equal portions. Form each into a ball and arrange on a baking tray.
5. Cover the buns and let it rise until double in size (it takes another 30-40 min) Brush the buns with some egg wash.
7. Bake in a pre-heated oven at 200 C 15-20 minutes or until golden brown.
8. Once out of the oven, brush with a bit of butter. Place on a wire rack to cool. Keep in an airtight container.

Have a nice day everyone!

Written and posted by MamaFaMi at 6:44 PM

Email ThisBlogThis!Share to TwitterShare to FacebookShare to Pinterest
Labels: Bread