....her arms swung around and hit her long bladed knife.. The knife slid down the counter, pointed end downwards and managed to scrape along her shin. (If I wasn't graphic enough: The knife is brand new). As luck might have it, the pointy end did not do any damage, but the blade did cut a 5cm long gash on her shin, blood gushing out, soaked towels, down to the bone...

What is your reaction when reading the above statement?
When I read each and every world, it sent shivers down my spine. That was what had happened to dear Rima according to her hubby. Get well soon Rima and have enough rest....tak de makna si Rima ni rest... dia dah buat 2 biji kek lagi dalam pada sakit sakit tu....

Tried this donut... or doughnut... recipe from Rima's blog after reading what her hubby said about the donut she made. He said.. "Sedap Ma!"..... and I second him! The donuts are really marvelous, so soft, so yummy! Otherwise, I won't ended up eating just ONE donut....didn't get to eat more though I managed to get about 20 pieces from half the recipe. My kids, surprisingly can't wait to gobble them. And surprisingly too, they came back for more!!! Then it's CONFIRMED DELICIOUS! I just hope that my nephew and nieces and also Sae and family thinks the same. Thank you Rima for sharing the lovely recipe with us. Allow me to repost it here for my future reference..at least.... 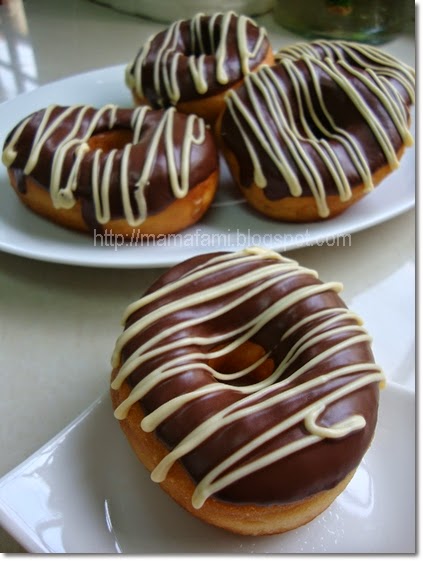 Stir ingredients A, knead until lumpy, add ingredients B, continue to knead until smooth elastic.
Rest dough for 10 minutes.. divide dough into several balls weighing 40g each.
Rest for a further 20 minutes.
Punch a hole through the middle, then fry until cooked. Drain. Chill.
Dip one side surface of the donut in the melted chocolate, sprinkle almond.
Place donut in fridge to harden chocolate..

Rima's way :
I dumped everything in my BM accordingly of cos.. click on ON and after one hr and 10mins my dough was done.. gave my dough a light punch and divided my dough into several balls.. let it sit for another 20mins bef punching a hold thru the middle of the donut.. fry till cook..

My way :
I used my breadmaker to do the kneading and proving job. Once the dough is done, I rolled it to about 1 cm thick and cut using a donut cutter. Arrange the donut rings on a floured tray. Let it sit for another 20 - 30 minutes (depends on the weather), then fry till golden brown. 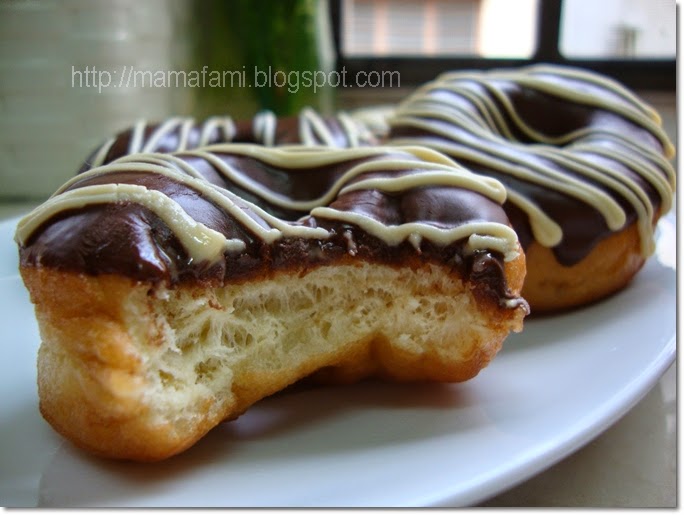 Have a nice day!
Written and posted by MamaFaMi at 6:49 PM